Off The Record was another small prototype made during my path of learning Unity and C# (based on Unit04 of the Unity Gameplay Mechanics course. I'm publishing this to show my approach, thought processes, and decision making during development. I try to keep these short and concise, if you have any further questions or feedback, I'd love to hear from you! Reach me on Twitter at @PhilipDrobar.

My goals going into this:

LOOK OF THE GAME: The original prototype just has some spheres on a hexagonal stage. I wanted to make it look more appealing while also improving the gameplay a bit. As the player rotates the stage, the thought of making it a spinning record popped in my head. I changed the player sphere to a basketball, making it stand out with its orange color. The enemy spheres are also a bit more uneven, making them look more threatening. I also added some walls at the edges of the stage. This creates some more surprising situations as the player and enemies alike can bounce off of them, either helping the player to stay on the stage, but also stopping enemies from falling off.

POWER-UPS: In the original prototype, the power-ups are spawned with the enemy waves. As they are timed though, it's possible to run out of power-ups before being able to push off all enemies. As it is very difficult to intentionally push them off without a power-up, I changed the powerups to be spawned periodically.

UI: There's no UI at all in the original prototype but I knew I needed to convey some basic info to make it playable for others. I decided to show the player the current wave number to implicate that there's more to come after the current enemies are defeated. As this is not something that's always important, moving it to the corner of the screen is fine.

The power-up bar is more important, thus moved to the top center of the screen. It's also in a matching color to the power-up, so it's immediately clear that the two are connected. The power-up bar helps the player in gameplay as they can decide whether they have time to go and try to hit an enemy or seek out the next power-up instead, making this crucial information.

What I would do next to improve this prototype: 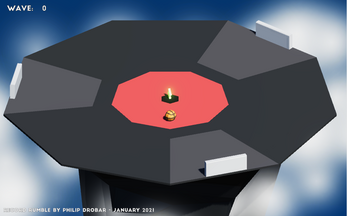